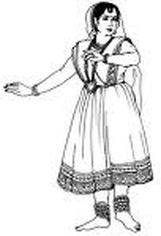 Kathak is one of the eight classical styles of Indian dancing. Kathak means to "tell a story." In ancient India, a shift in dance drama occurred from temples to royal courtyard Revolutionizing the Kathak dance form. This was a tradition passed down from generation to generation demanding the highest standards of training, intelligence, and most of all sophistication. In the 15th century A.D in India, a new manner of praying and expression of devotion swept the land.  It was called Raas-Lila. Raas Lila was a combination of music, dance, and narration. Examples of this Lila are the Krishna Lila, Ram Lila, etc. When the Mughuls came to rule in north India, Kathak moved into the palace. Devotional lyrics were replaced by very fast rhythm and based on the theme Shringgaar or love. In the 19th century, during the reign of Wajid Ali Shah or Avadh, Kathak flourished. Wajid Ali Shah was himself a poet, dancer, and a musician.

During British rule, Kathak took a sharp decline in popularity. It labeled by Victorian administration as vulgar entertainment and was consider "nachaniyas" and associated the tawaifsass prostitutes. This is a misunderstood label for female dancers just like Geisha of Japan.

Kathak is the hallmark of pure dance or Nritta. Unlike south Indian dances, Kthak does not open the knees in a sitting position. The first position stand is standing straight. Like other Classical Indian dancers all wear bells around the ankles on a pad, Kathak dancers bell "ghungroos" are on a string wrapped in layers around the ankle and usually double layers than south Indian styles. Kathak moves vary with slow to fast in spins, the heavy sound produced by the feet, and storytelling via hand movements known as "Mudras". Kathak is the only dance style to exhibit a mixture of Hindu and Muslim cultures blended together.