Broward County did a great article on Jayadevi Arts Inc

A recurring dream of dancing with the revered goddess of the Hindu culture, with her ornate attire, sparkling jewels, and spirited ritual dancing, sparked Plantation resident Denyse Baboolal to share a passion for dance with both young and old.

“I was often approached about opening a dance school in South Florida,” explains the native of Trinidad and Tobago. At first, she was unsure if she wanted to take on all of the workloads that operating a school teaching a variety of traditional and cultural dance forms would entail. Her Indo-Caribbean heritage frowns upon women taking up a full-time job in the performing arts, but rather puts a higher emphasis on education and study. Despite this, she still followed her vision and things fell into place. She recalls, “I dreamed of the goddess and myself dancing together and knew that it was meant to be.”

This dream became reality in 2008 when Baboolal opened Jaya Devi Arts, Inc. (JAI). Children and adults shared the same class and learned to dance such spectacular performances as Chutney, Lucknow Kathak, the Spoken Word, and Dholak. The name “Jaya Devi” means “victorious goddess” and pays homage to the strength and commitment of the Hindu divinity. It is this strength and an equally strong desire to keep the tradition alive in her new hometown that led Baboolal to teach at her studio.

After 17 years of serving as a dancer, choreographer, and director at the Rajkumari Center for Indo Caribbean Arts & Cultural in New York, a newlywed Baboolal relocated to Florida with her husband. “It is customary in the Hindu culture that a woman moves to wherever her husband’s job is located,” she explains.

What began as a dance school to teach both traditional and popular Indo-Caribbean dance forms soon transformed and grew into a non-profit 501 c(3) artistic center where influences of Indo-Caribbean communities from Guyana, Trinidad, Jamaica, Suriname, and other Caribbean locales can learn and share together. Master artists from around the world come to share their experience and weekly classes in dance, arts, and crafts are held for all ages. Her goal is to have these arts learned harmoniously to save what has been dying out among the newer generations.

“Our new generation is so familiar with hip hop, rap, R&B, and other styles, but they don’t even know about their own rich culture,” Baboolal says. “Our aim at JAI is to instill it in them and help preserve it for future generations. The East and West have different ideas and styles, but we are all together to educate for the same cause.”

Workshops, classes, performances, and events are all now integral parts of JAI. Most recently, the organization received a grant from the Broward Cultural Council to help it present many events that are as unique as they are important to the preservation of Indo-Caribbean arts.

“For the first time in the State of Florida, we will host the ‘Indo-Caribbean Hosay, Tadjahs and Tassa Festival,’ which is a monumental event,” Baboolal explains of the summertime extravaganza planned for July 18 to July 27, 2013. This street processional involves colorful costumes, detailed jewelry and the “building of two tadjahs or floats that will move to the beat of the tassa drum.” The two floats are ornate replicas of the infamous Taj Mahal built of foam, wood, paper, bamboo and glitter, and the two pass each other, creating the “Kissing of the Tadjahs.”

Historically the tadjahs were released into the waters off Trinidad after such a procession; however, Baboolal has bigger plans for the floats.

“We hope to share these magnificent tadjahs with the community by having them on display locally for a few months,” she explains. She has reached out to area museums and cultural groups to find a suitable location for their display.

“The Indo-Caribbean culture really needs nurturing,” she reiterates. “The young generation needs to embrace its heritage so that we can instill a passion for the arts for more generations to come.”

In the works for the future of JAI is in collaboration with local women’s groups to help those of Indo-Caribbean culture work through the challenges of daily life. Through an in-house support group and a combination of activities and artistic endeavors, called Nari, Baboolal and others are able to “empower others to rise above abuse and allow them to vent their frustrations.” She hopes to bring this service, along with the rich dance, arts, music, and culture to the entire Broward County and surrounding communities.

For more information about Jaya Devi Arts, Inc. please visit the organization’s website at www.jayadevi.weebly.com or contact Denyse Baboolal via email at jayadeviartsinc@yahoo.com. 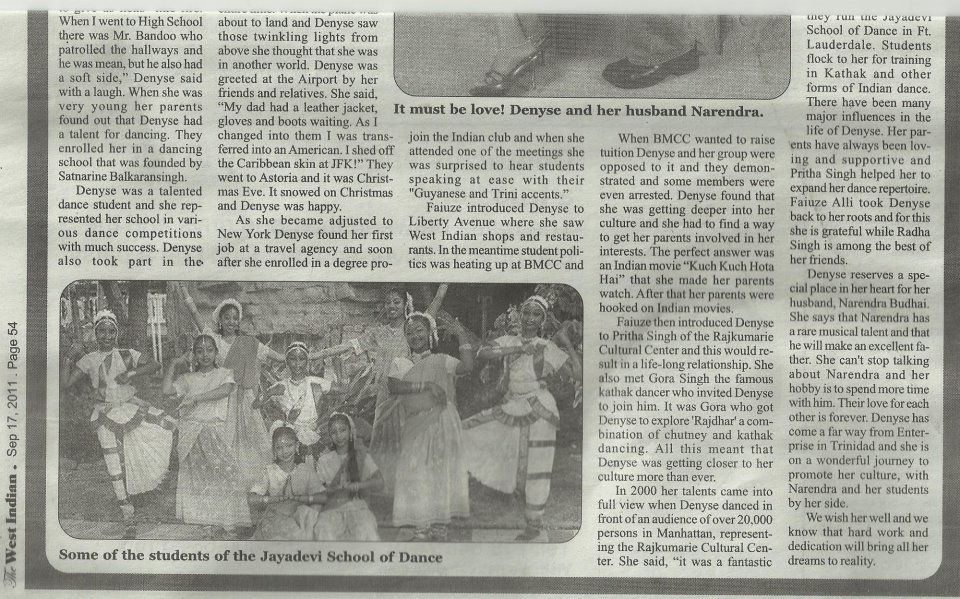