All Donations and Our Products Proceeds will go towards our JEM Kid Programs and Services. 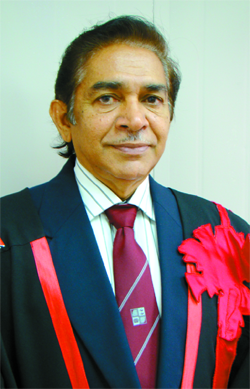 Satnarine Balkaransingh is a Kathak Classical dancer, choreographer, arts director and co- founded Nrityanjali Theatre Inc of T&T in 1977. Balkaransingh has researched, scripted and directed several ballets/dance dramas and over 35 full length stage productions, and has performed extensively in India, UK, North and South America and the Caribbean; he also performed for Heads of States and Royalty.Balkaransingh holds a BA (Hons.) Economics, Delhi University; MSc (Project Planning and National Development) UK; A Diploma and a Post Graduate, Specialisation Course in Indian classical Dance, India. He has been trained in Kathak and Kuchipudi classical dances, tabla playing and Indian folk dances plus contemporary dance (Martha Graham Technique). A part time lecturer at the University of the West Indies, and the Phd. Candidate at the University of Trinidad and Tobago, Balkaransingh is a consultant in Policy and Strategic Planning, Project Management and in Culture. Balkaransingh is currently the Artistic Director of the Kathak Kala Sangam, an Institute for the Arts. He is a former Deputy and Permanent Secretary (AG) in the Public Service of the Government of Trinidad and Tobago and Director of the Programme Planning and Reconstruction Division in the Ministry of Finance

Rajkumari stands out as major pioneering Caribbean woman writer, political activist, educator, and distinguished cultural leader in her native land Guyana, where she received national honors. She was respected and praised by her contemporaries for the quality of controversy, criticism and debate present in her works, for which she received many literary prizes and awards; she is revered by numerous younger poets, writers, scholars, artists and performers, to whom she was a patron and mentor. Rajkumari was concerned with Indo-Caribbean identity finding their place in a region undergoing harsh disappointing political, cultural and social change. These critical issues found their way into her literary work.
“... an unmistakable spirit concerned with roots...the truth is that long before the obsession with ‘roots’ became the ‘thing’, Rajkumari Singh clung to her Indian Heritage with all the vitality she could muster, in all this, never allowing her nostalgia for the life-style of her forbears to so cloud her raison d’etre that she thought the thing to do was to go back to the Indian Sub-Continent ...”       -Raschid Osman, Guyana Chronicle, 1979
"Her involvement with the arts, politics, and the politics of culture was lifelong and was invariably a surrogate cultural and artistic mother to younger writers and artists."  Dr. Jeremy Poynting, South Asian Journal, 1980-
"Crippled by polio at age 6, Rajkumari truimphed over her physical handicap - Parallel to her artistic and creative life, she was deeply involved in educational, cultural and social welfare work, and raising her own 8 children, all from a wheelchair."        -Gora Singh, The Sound of Her Bells Publication, 1995
As poet, dramatist, editor, and encourager of the arts - particularly a generation of younger poets, writers, artists and performers - has been highly significant."    -Alison Donnell and Sarah Lawson Welsh, Routledge Reader in Caribbean Literature, 1996 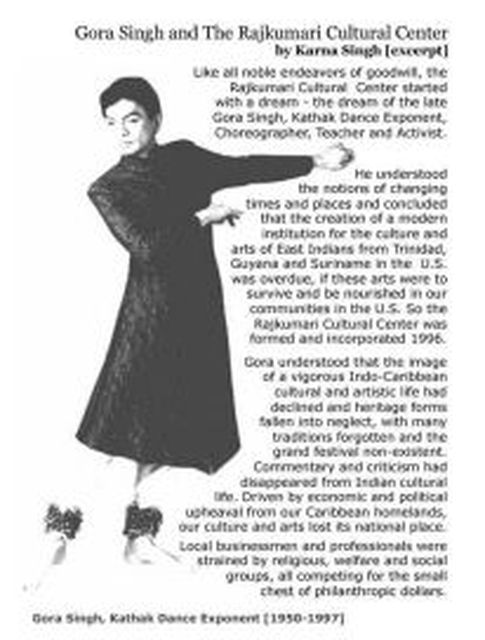 "Gora Singh was a friend of all people. But he held the disadvantaged close to his heart.  He also struggled for racial harmony over and above the call of duty... If ever there was a voice of hope and inspiration, it was that of Gora Singh. If there was a voice of integrity, it was that of Gora Singh... His dreams, hopes, and aspirations were boundless.  He never despaired and saw opportunities when others saw nothing.  He knew the meaning and value of life." (Rohit Kanhai in Caribbean Daylight, Monday June 9, 1997)

"Dancing and teaching were only two sides to this multi-faceted individual.  As an intellectual he presented papers at the University of the West Indies (1987), Columbia University (1988), and Carlton University (1995).  As a producers/choreographer he undertook cultural projects, in collaboration with organizations... As a philanthropist he lent his time and expertise and organizational abilities in establishing and fostering community organizations (Annan Boodram in Caribbean Life, July 22-August 4, 1977)

:"His death brought great grief to all those who knew him.  He was a bold artist, an accomplished Kathak dancers who was obstinate in his pursuit, impassive to rebuke and clever in charting his course in the convolutions of businessmen and politicians."  (Ramesh Kalicharran in the Caribbean American, June 23-July 13, 1988